Leaving Behind a Legacy – Katie Miller

When you think Katie Miller, the first thing that probably comes to your mind is the beloved bakery located in the heart of Downtown Circleville, Lindsey’s Bakery. They’re best known for their giant pumpkin pie during Pumpkin Show, and their delicious, sought after and beloved treat that Pickaway County residences and visitors love – the pumpkin doughnut.

“She’s donated so much stuff all the time to everywhere. She created and helped with a lot of jobs here.  Held this place together for many years,” Zach Miller, one of the owners at Lindsey’s shared.

Katie was born in Portsmouth, Ohio but later moved to Circleville with her parents after her father bought a bakery that was for sale. Her father and his business partner had a bakery in Portsmouth but as he was traveling to an Ohio State game, he ended up stranded in Circleville due to a snowstorm, which led him to discover the bakery.

Katie eventually took over the bakery from her parents, where she’s worked to keep Lindsey’s a valued part of the Pickaway County area and the Circleville community.

Katie made it a point to donate to different areas within the community, including soup kitchens at the VA hospital – but Zach shared that one of the things she was most inspirational for was the dedication she put into her family’s business.

Zach shared that Katie had been involved with Lindsey’s Bakery from about the 1960s until she semi-retired in 2015 when her sons took over the business. Even then, she was still pretty hands-on within the bakery. She worked there for as long as she could.

One thing that stood out to Zach was that Katie at one point in the 1980s was offered to have a Lindsey’s put inside all the Walmart stores, something that she declined because she wanted to continue contributing to the area.

“I believe it was in the 80s, she had the offer to put a Lindsey’s in all the Walmart stores, and she declined because she didn’t agree with the way that they did business. You know, like the corporate world,” Zach explained. “I thought at first was kind of, you know, not a smart decision but now when I look at it I understand why she did it.”

When asked about how Katie’s dedication for her business and community might be an inspiration to others, Zach’s first thought was about how her focus was to keep her focus on the community and on doing what she loved.

“I think that’s a major part of if you’re going to start your own business, you definitely want to love what you’re doing because if you don’t it’ll consume a giant part of your life anyway. And if you don’t love it, you’re probably gonna be miserable,” he admitted, going on to state: “I think kind of one of the things we mentioned earlier about like keeping things local. Even despite like you know, mainly [focusing on] your beliefs instead of money. I think that could be very inspirational to somebody.”

Katie Miller was born on July 12, 1943, and passed away at the age of 77 on July 18, 2020. Her inspiration through her hard work at Lindsey’s, to her dedication to her family, and her love of her community will leave behind a legacy that will inspire many for years to come. 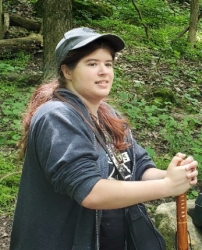 Lauren Esteph
Lauren Esteph at Dimple Times
Lauren has been writing since she was at least ten years old – and anywhere she traveled, you could always bet that she would have a journal and a pen in hand. Though she writes mostly for the Dimple Times now, she has dabbled in writing short stories and novels throughout her life.

She's spent most of her life in Circleville, Ohio – which has been a huge inspiration behind a lot of the locations, situations and ideas she has come up with for her different stories over the years.

Lauren enjoys using her writing to bring enlightening, encouraging and informative content to the Dimple Times – but outside of work, she also enjoys curling up with her cat to watch movies, read or simply to write for herself.